The crew worked late into the night Wednesday, eager to push themselves as far as they could go in search of VAX greatness. Lone Star Beer once again poured freely for the developers and designers of the Vox Media product team.

As Thursday morning dawned on Austin, the team returned to our temporary office space. Everyone was ready to pick up where they left off on Wednesday night, transitioning ideas off of whiteboards and onto computer screens. 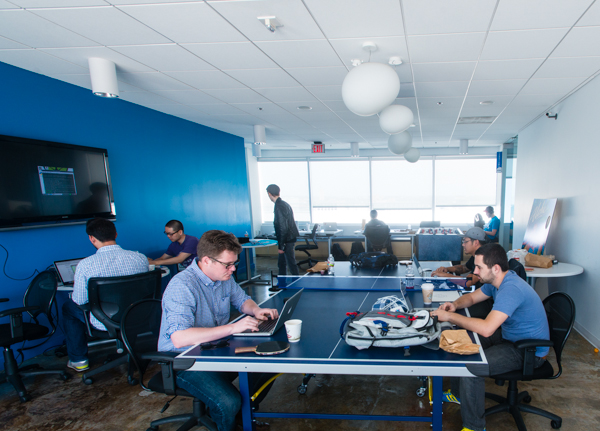 Where Wednesday was cloudy and cool, Thursday proved to be sunny and warm. The office space came equipped with a great patio, and the 20th floor view of the Austin cityscape proved hard to ignore, even with a brisk wind coming over the balcony wall.

By lunchtime, we had worked up an appetite, and our office manager, Thomas, made sure we were well fed with pizzas from Austin’s Pizza. The fridge was fully stocked with sodas and water, and coffee brewed all day long.

With the sun shining through the windows, projects began to take shape. Binder’s developers were focused on the user experience of their wiki project, while team designer Warren mocked up several logo options for the internal tool.

Polyphone, David’s Polygon iOS app project, was well on its way to becoming a full-featured experience: not only were Polygon logos placed throughout the app on loading screens and menus, but Polygon articles were filtering through into the main interface.

The Polygon digital magazine was also finding its form: the core group of designers were quickly becoming experts in Mag+, honing their craft and adding layers of functionality to the digital magazine’s user experience as their skillset grew. 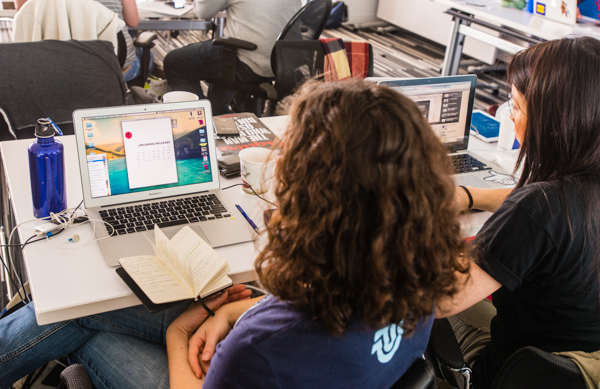 Providence, a traffic analysis tool, was on its way to delivering real-time data to stakeholders and focused blog managers. Beacon, a top-down view of the product team’s workflow, had come a whole lot closer to being the ultimate resource for at-a-glance information about day-to-day progress on bug reports, sprint work and deploys. All the other projects continued to evolve in preparation for Friday afternoon’s big reveal.

As day turned to dusk, VAXers turned their attention to the skyline: a magnificent sunset reflected off the clouds, showcasing brilliant hues of orange and pink. With nightfall came a resurgence of activity, and the product team continued to labor late into the dark. Games of Tetris and ping-pong offered a brief break from the hard work, while bourbon and beer were sipped from plastic cups. 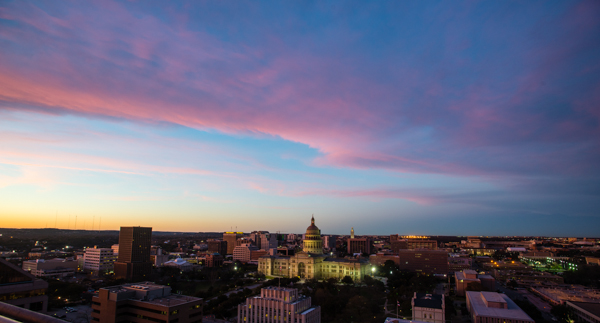 If there’s one thing to eat while in Texas, it’s barbecue. An order was placed with Dickey’s Barbecue Pit, and Thursday’s dinner did not disappoint — a full spread of pulled pork, brisket and sausage provided a tasty main course, while delicious sides of mac and cheese, baked beans and potato salad were piled high on the edges of every plate. There was no such thing as a single helping, as the crowd picked away at the remaining assortment of meats and sides as the evening wore on.

With little over 19 hours to go before the teams unveiled their proof of concepts and works in progress, plenty had been accomplished. Apps were functioning on simulators, rails applications were evolving, and user interfaces were being fine-tuned. VAX was pushing forward at full speed, and there was no signs of slowing down for the product team entering the final day of VAX ‘13.