Chicas Poderosas: Mentoring the next generation of 'powerful women' in tech and journalism

Share All sharing options for: Chicas Poderosas: Mentoring the next generation of 'powerful women' in tech and journalism

I'll admit it: this harsh DC winter definitely influenced my decision to go sunny Miami; the promise of 80-degree weather was hard to ignore. That, and I couldn't pass up the opportunity to spend four days immersed in storytelling with women in journalism and tech at the Chicas Poderosas conference, held on April 18th-20th at the Univision office and on the campus of the University of Miami.

Chicas Poderosas is an initiative started last year by ICFJ fellow Mariana Santos who wanted to create a community of Latin women journalists and connect them with people working in technology. By pairing enthusiastic Latina professionals with mentors, Mariana has used the formula that has worked well for many top media companies which is "the magic" that can happen when editorial and product teams work together closely.

As a female designer at Vox Media, I was invited to come as a mentor alongside others from NYTimes, OpenNews, BBC and The Guardian to name a few. All these mentors hold various roles in the technology field, working as designers, project managers, developers and more. There were around 100 attendees participating who had traveled from various countries in Central and South America, making for a very diverse audience. Our time over the four days was split - when we weren't listening to guest speakers, we took part in a hackathon.

"Chicas poderosas" literally translates to "powerful women"-the mantra of this organization. The goal of the conference was to inspire the attendees to be strong and successful women in media and technology. Diversity holds value in many companies and the greatest way we can enact change is if women take on these much-needed roles in technology. For those of us who are already in these positions, it's vital to help build opportunities for other women.

When I was first asked to attend this event, there were a few things I was hesitant about. Given how young Chicas Poderosas is, I wasn't too familiar with the community. I only graduated last year, so I was surprised and delighted when they asked me to be a mentor. On top of that, I'm not a Spanish-speaker, so the language barrier concerned me. In the end though, I realized that what we all had in common was a passion for storytelling. What we couldn't communicate in language, we were able to demonstrate in design and code and in the end the visual stories we put together held more value than just words alone.

By the end of the weekend, the very things that concerned me were what I ended up enjoying the most. It made me realize how powerful it can be when we step out of our usual boundaries and engage with others who ultimately have the same goals and passions. 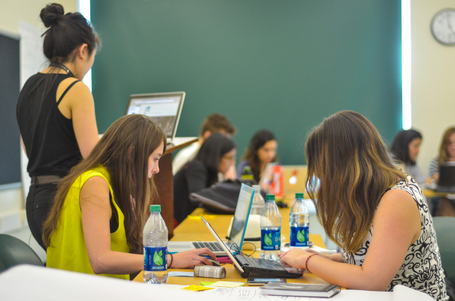 My dreams of sunny Miami didn't exactly come true: I only saw the beach for 10 minutes the whole weekend. Looking back, though, I wouldn't trade my time with these incredible women for anything. I got to spend four entire days hacking and engaging in discussions with women doing admirable work in journalism and tech. At times, I forgot I was even in Miami.

Through Chicas Poderosas, I got the chance to meet individuals I wouldn't have met on my own and while I went as a mentor, I felt as if we all learned from each other and benefited from our shared experiences and ambitions.

For more information on Chicas Poderosas visit their website and check out the hackathon projects here.