Chief Product Officer Trei Brundrett kicked off Day 1 with a talk unofficially dubbed, "Less Yack, More Hack." After updates on current, non-Vax projects and a discussion of some internal business stuff, everyone did indeed get right to hacking.

However, more than a few members of the team have never experienced a Vax before, so we pulled them away from hacking for just a little bit more yacking.

Here are their first impressions:

The start of Vax was basically day 2 at Vox Media for me, so it was a little bit overwhelming to suddenly be in one room with so many smart creative folk. That said, it's about what I expected — both the constructive, fun attitude everyone's taking to building cool stuff and all the shenanigans. Everyone's been super helpful in showing me how to get things done within Chorus and it's been a blast to add some big new features that will hopefully blow everyone away when we present on Friday.

I sort of expected Vax to be a time where everyone could get things done that would make their lives easier in the day to day, and that they maybe couldn't easily make the time for otherwise. It seems pretty apparent that there's ongoing work on tools that make the day to day more efficient — which is a really cool thing to see. Because of that ongoing work, Vax is allowed to be a really productive dream factory that lets the team experiment with new ideas and iterate on existing ones.

Vax so far has been like a microcosm of the culture at Vox Media. It's a condensed version of what makes our team and culture so great: extremely talented and diverse people working together in a fun, fast, exciting, and sometimes zany environment. It's been a particularly rewarding experience for me, as I've been working at Vox for a few months now but there were a few members of the team I hadn't met before. Meeting with them and even working with some of them on a hack project has been really fun. One of the best parts of my project/team in particular is how many disciplines are represented; we even have someone from editorial jumping in to help consult on the product we're building. It really speaks to the fact that we have a super collaborative culture at Vox Media, and there are no siloes between product and editorial. We're all working towards the same goals and building really cool, useful stuff together.

"It's almost scarily awesome, as an editor, to be surrounded by product teams who aren't just able to build things in a week that make all of my wildest editorial dreams come true, but who tell me that my dreams weren't cool enough so they made them even better. I've worked at lots of media companies and the default has always been that editorial ambitions get limited by the product team, so it's a very different and amazing experience to feel like I'm struggling to keep up with what the product team is doing. It's great. I just wish I understand what the hell you people are talking about half the time." 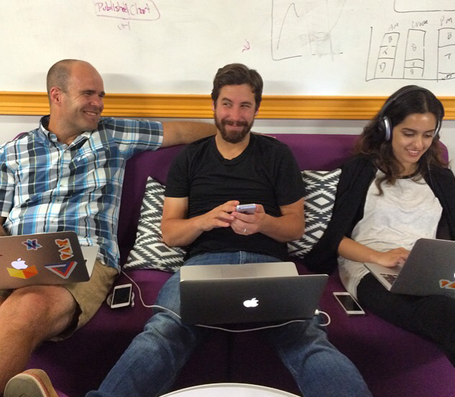 Everyone is cranking away on over 30 projects involving front-end, back-end, design, event planning, and documentation. Things have appropriately lofty names like Tempo, Ensemble, and Lately. And all — okay, most — of them are going to be really exciting to see once they're finished. Others are purely for hacking science, like playing with the Yo API.

We'll get into the nitty gritty on individual projects in a coming post. Until then, adieu.