By day 3 of Vax, the principles of "Less Yack, More Hack" had become merely a starting point for the crew who rallied in Philadelphia, Pennsylvania to build internet. That rallying cry was but a foundation upon which these makers were constructing an immovable digital fortress of hack. An awe-inspiring bulwark against the endless hammering waves of yack. A monument to hack so grandiose that it warded against not just yack, but even sleep.

What I'm saying is that by Thursday, everyone was pretty tired but they kept working on their projects and it was great.

Thanks to the excellent audio/visual services of the space we occupied at Benjamin's Desk, we also had several televisions and a projector to show the US Men's National Team duke it out with the Germans at the World Cup. It was an exciting game and a blast to watch with a room full of friends and coworkers, but as you might have guessed by now, the work continued. 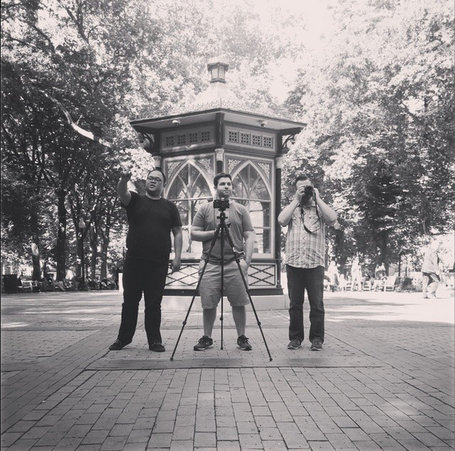 We did allow ourselves two breaks on day 3 to make time for honored Vax traditions. First, in the afternoon, James Chae and Guillermo Esteves successfully herded programmer cats to Rittenhouse Square for our team photo. It was a great time for everyone to take a breather, face the same direction, and tell some of their best jokes while we waited for Ted Irvine, Senior Design Director, to show up. Guillermo's excellent team portrait, along with many, many other photos of the Vax week, will be posted on the product team Flickr. 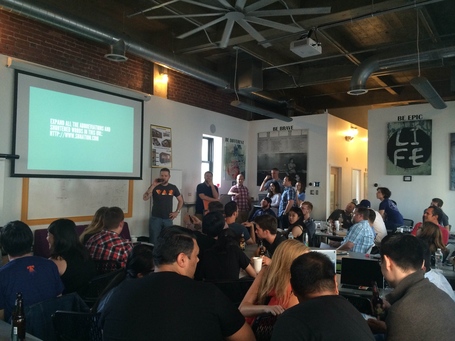 Then, after a few more hours of work, we broke for an evening of much-anticipated Vax Trivia, led by the charming, hilarious, and relentlessly strict duo of Dan Chilton and Jake Lear. We found that the team knows a lot about pasta variants and pop culture, but not so much about obscure facts about teammates' biographies or spelling.

That about sums up day 3 of Vax. Lots of fun, but even more heads-down work on over 30 amazing projects. Day 4 is all about demoing those projects, so we'll save the details for that post and share some of our favorites.